Scroll down to see how to recognise a pneumothorax on ultrasound.

The apices form part of your 'review areas' when analysing a chest radiograph. In this example, pay particular attention to the right apex and look for a curvilinear line that is the lung edge, beyond which no lung markings are seen. This is a small right apical pneumothorax which could easily be missed if you don't look for it.

Pneumothorax can be either primary (often young, thin, male patients) or secondary (those patients with predisposing disease) or traumatic. In primary pneumothorax the BTS(1) advise aspiration if the patient is breathless or the rim of air is greater than 2 cm. The aspiration may be repeated if unsuccessful or drainage may be required. If resolution does not occur following drain insertion and addition of suction over 5 days, referral for surgical management is indicated. Secondary pneumothorax is managed more aggressively and insertion of a chest drain is indicated if the patient is over 50, breathless or the air is greater than 2 cm deep. Otherwise one attempt at aspiration then drainage is indicated.

On a PA chest radiograph look carefully at the apices to identify a lung edge. A radiograph taken on expiration may identify a smaoll pneumothorax, though this is rarely performed now days. If a large pneumothorax is present, look for mediastinal shift. On an AP or supine radiograph the findings are more subtle. There may be greater lucency at the bases (air rising to the most superior part of the lung as the patient is lying down) or a deep sulcus sign.

This video (above) shows the normal sliding of the pleura with comet tail artifacts. When there is a pneumothorax the chest wall moves, but you no longer see the pleura sliding and you lose the comet tails.

Using M-Mode the normal appearance of the pleura is called the seashore sign. You can see this in the image above where the trace below the B-mode image demonstrates a linear appearance above the pleura and a speckled appearance below. When there is a pneumothorax, you lose this (see below). 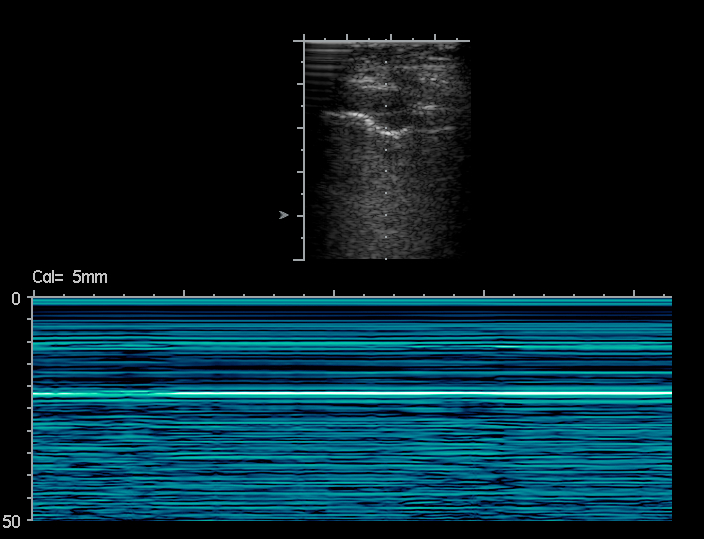