The initial anatomical checklist is should be assessed in this order: 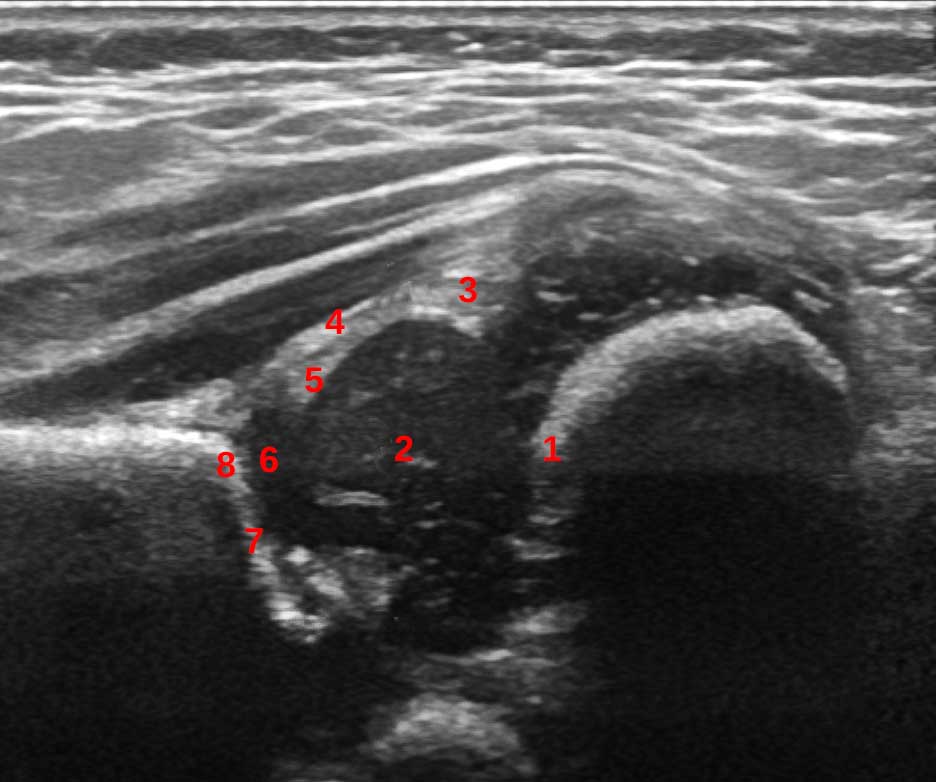 Further assessment for the following structures should be performed to ensure the correct plane has been obtained and that the image can be used: 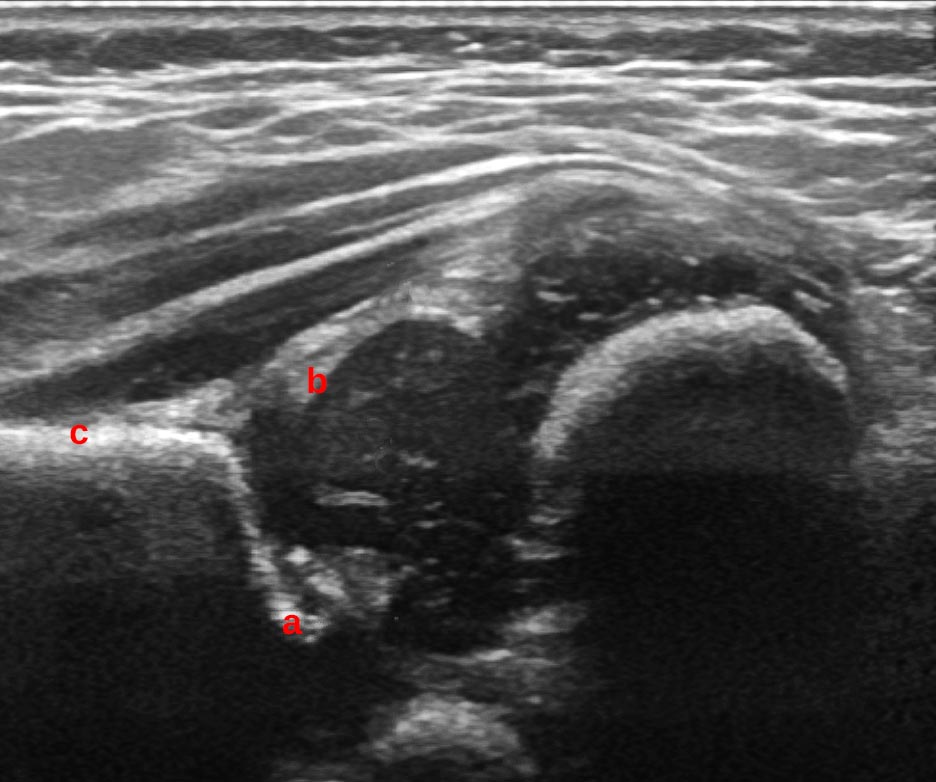 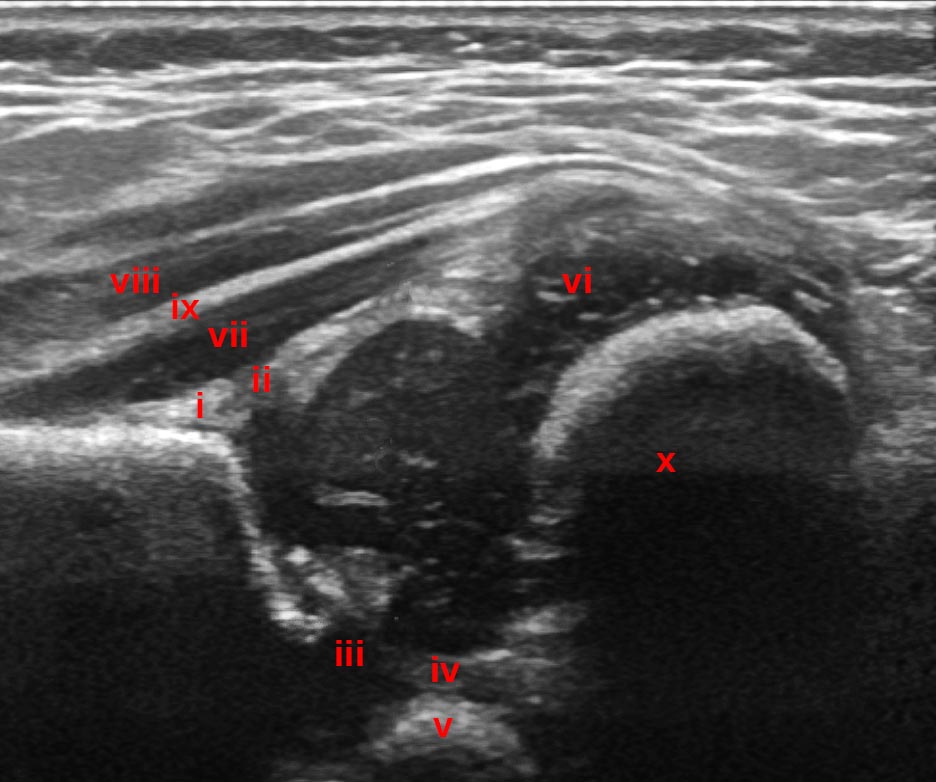 This page assumes the standard radiological convention of superior and rightwards structures are displayed on the left of the screen as opposed to Graf's method of flipping and rotating the images.

A high frequency probe (e.g. 5-15 MHz) should be used, with the lower frequencies selected when greater penetration is needed.

Using the Graf method the hips should be slightly flexed [1, 2]. The patient should be on their side and the probe is placed, vertically orientated, on the lateral aspect of the hip. 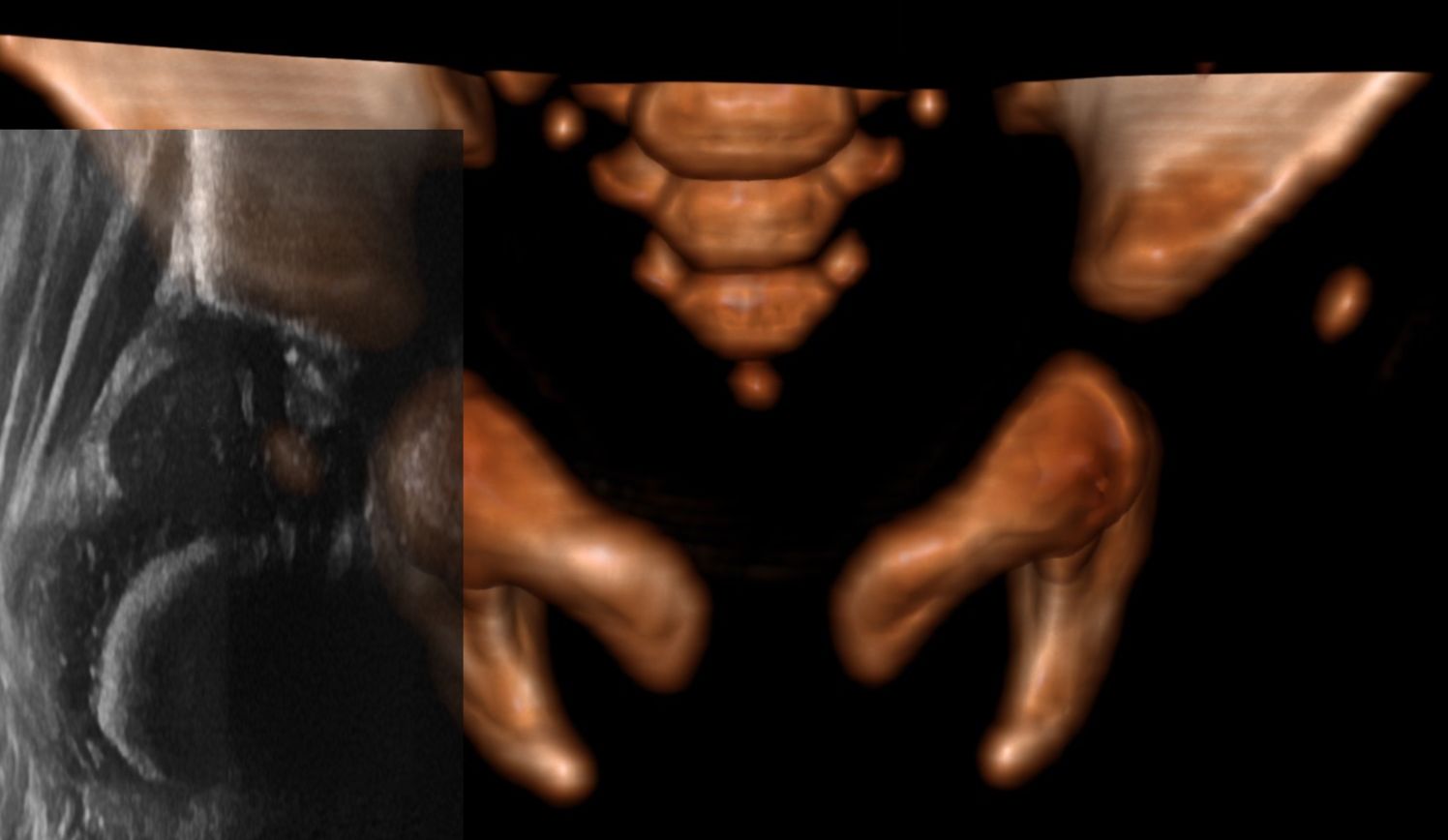 After identifying the osteochondral junction, the femoral head, synovial fold, joint capsule, acetabular labrum, acetabular cartilage, bony roof of the acetabulum and turning point (see earlier) should be identified. The lower limb of the ilium and the triradiate cartilage indicate the acetabular center. The ilium should then be made straight on the screen. Since, at this point, the ilium raises anteriorly and superiorly and falls posteriorly and inferiorly, to get a straight image of the ilium, you need to align the probe between the rise and the fall.

If you are scanning the right hip, rotating the probe clockwise will result in the part of the image formed by the top of the probe to raise in a curve: 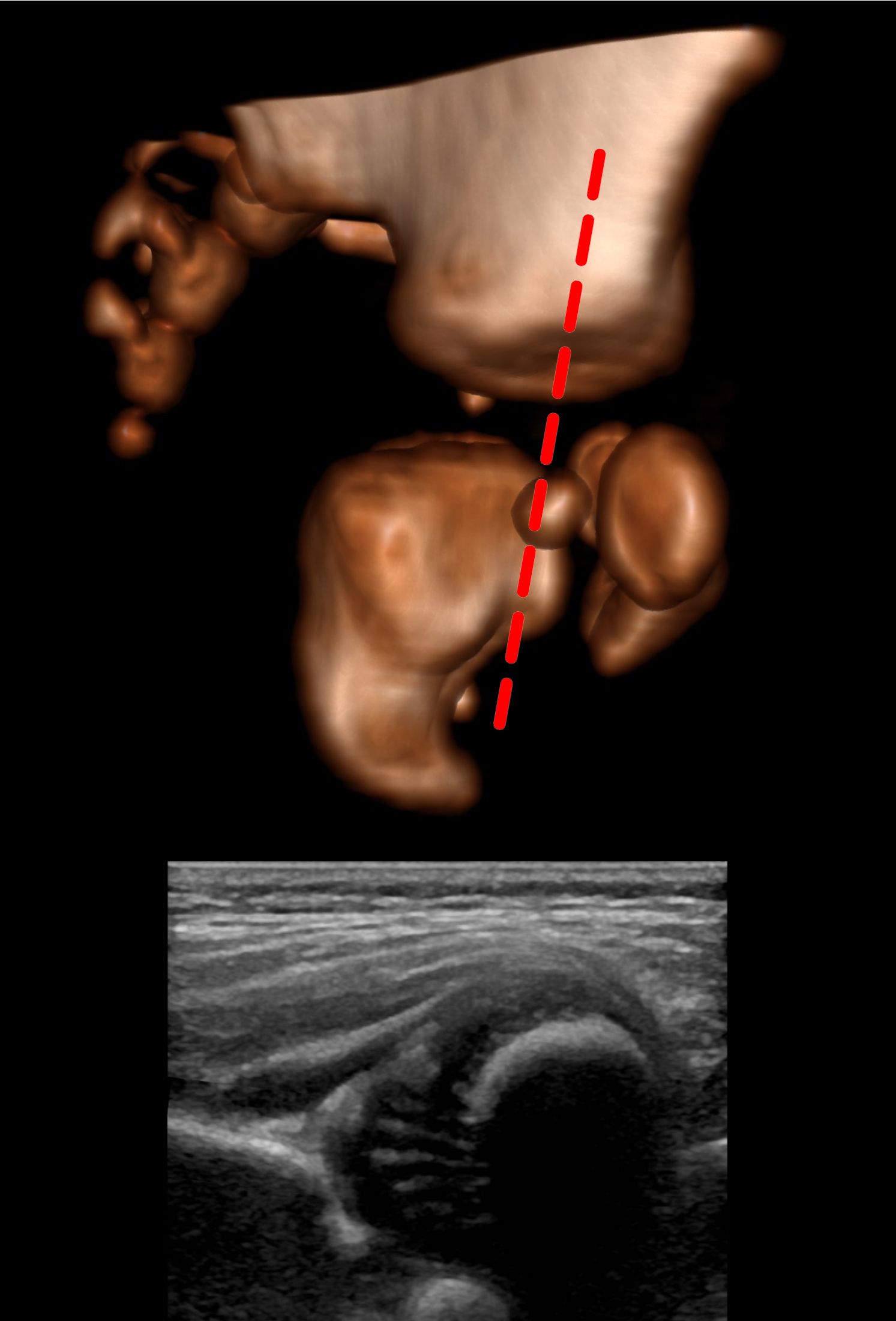 And if you rotate anticlockwise, it will cause it to fall as a curve: 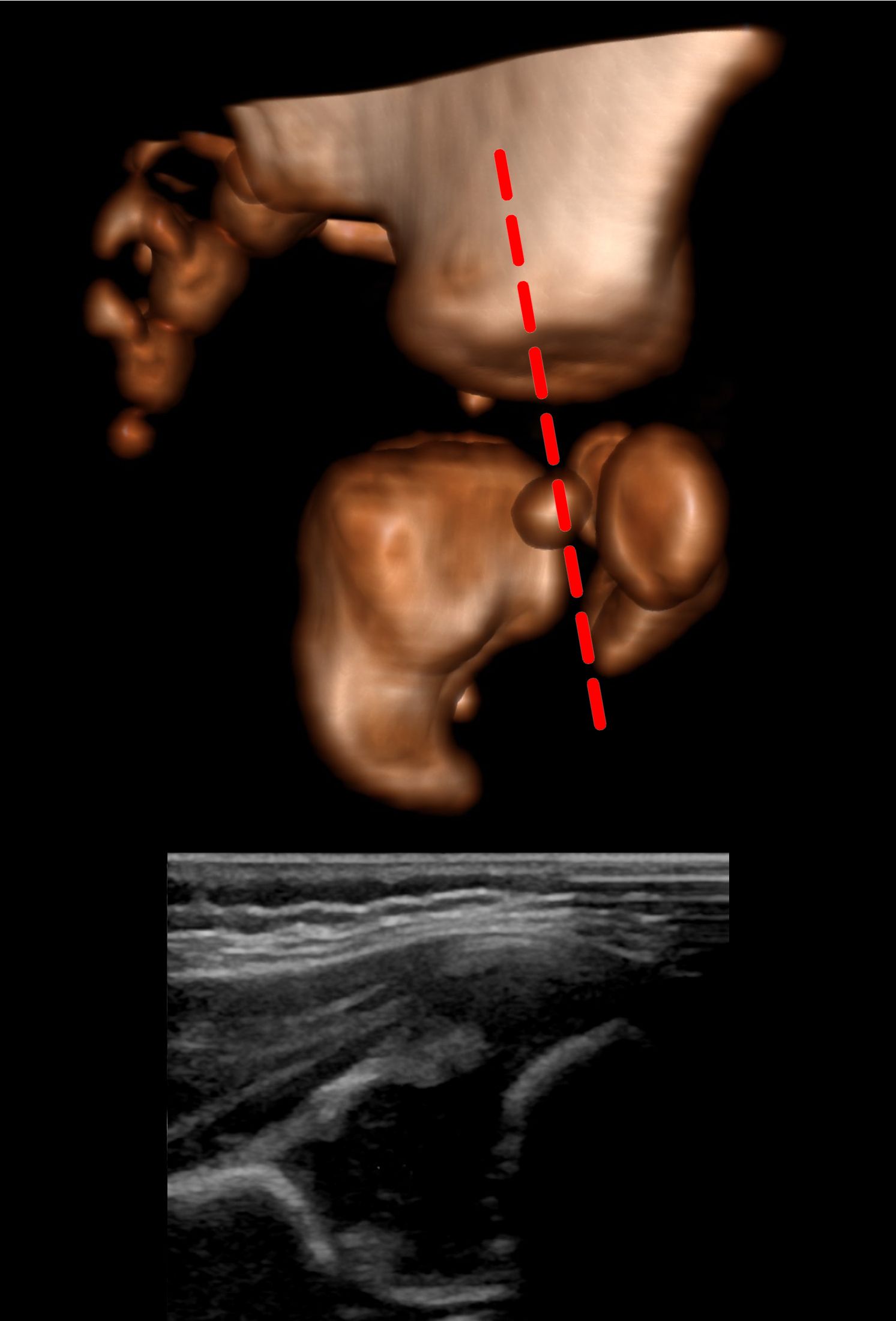 So to make a straight line you either chase it down by rotating anticlockwise or raise it up by rotating clockwise whilst maintaining the centre of rotation such that the structures of interest remain on screen. The opposite rotation is needed when scanning the left hip. 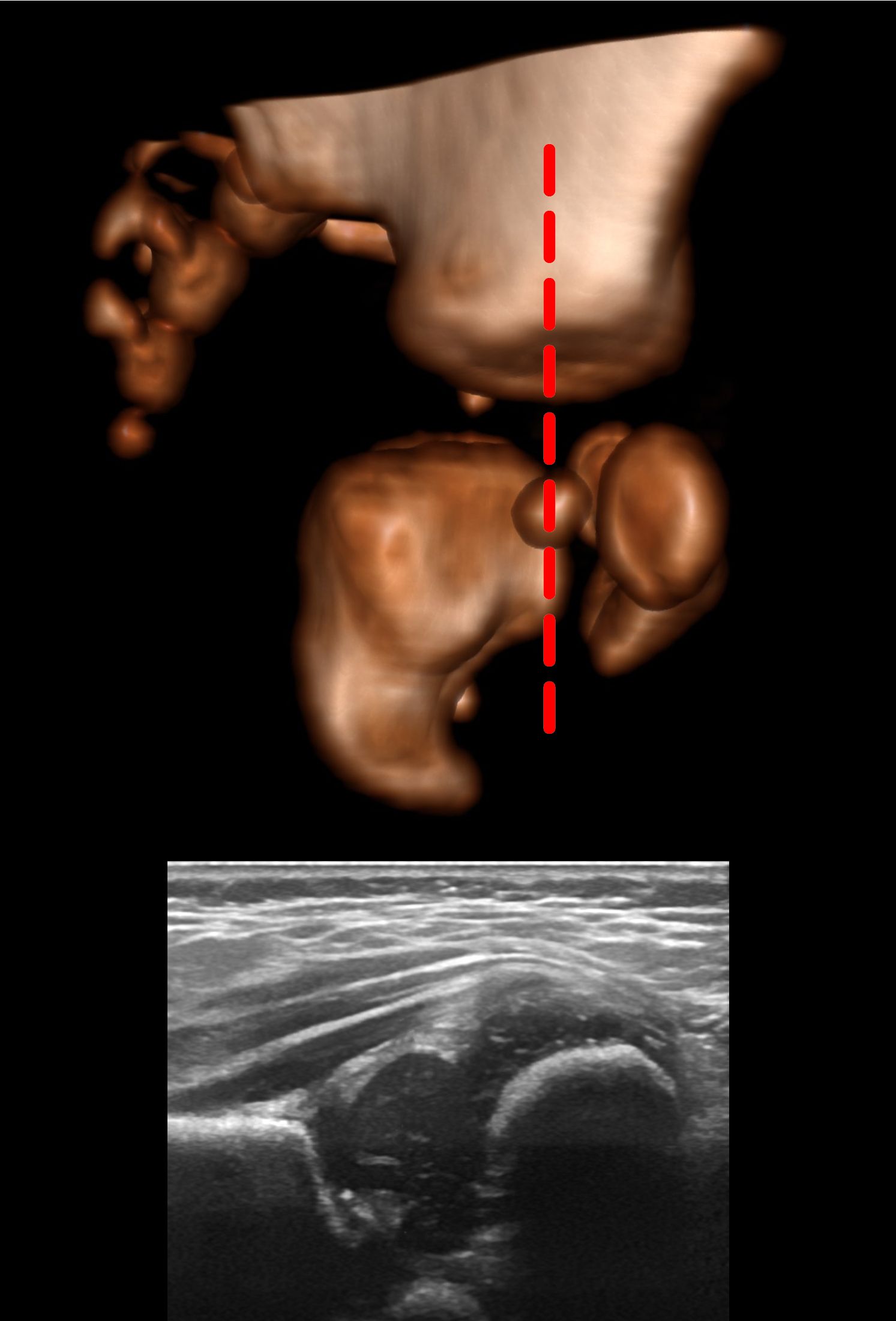 To measure the angle, a baseline plane is drawn along horizontal or vertical ilium starting at the point the perichondrium meets the ilium. A further line is drawn through points placed at the lower limb of the ilium and at the turning point. just touching the bone, not cutting in to it. The angle between baseline and this line is the alpha angle. The angle from the baseline to a line through the turning point and the middle of the labrum is the beta angle. The lines should not cross at a single point. 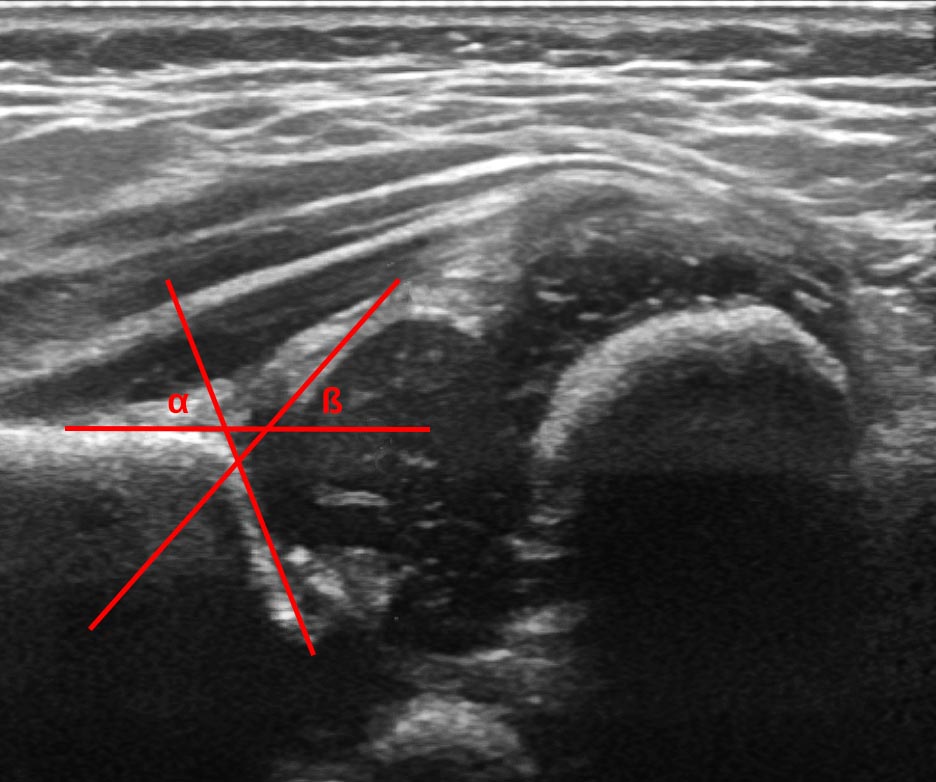